Join Land Ethic Vermont as they celebrate the arrival of April in our woods through the words of Aldo Leopold and a list of resources for you to read, watch, listen and of course, learn!

Heartwood: Stories from the Vermont Woods is a new podcast that connects Vermonters to our forests, forest management, and the forest economy.

Notes from a Tree Stand 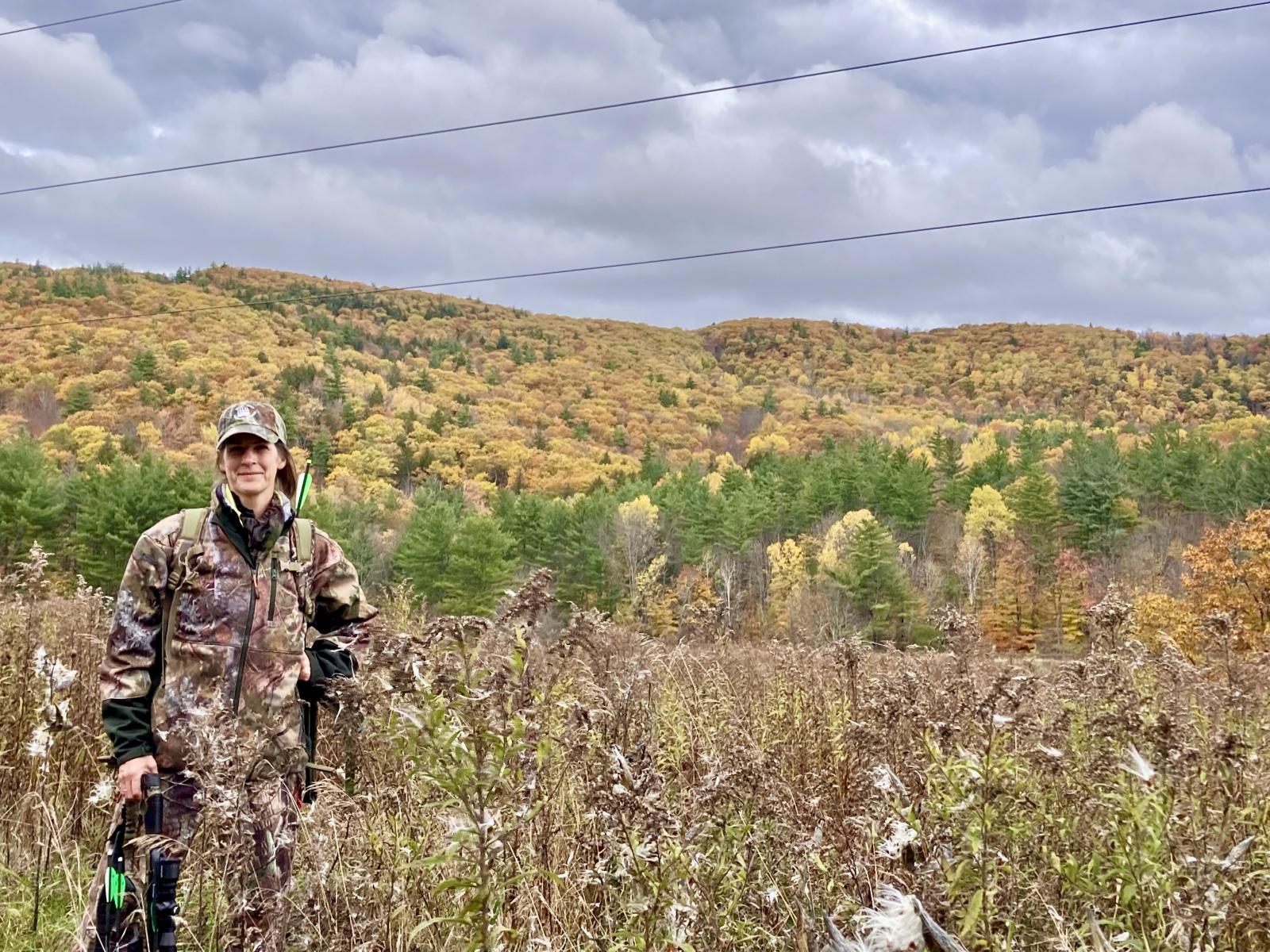 This was the first season, as an adult hunter, that I was able to spend time in a tree stand. My hunting partner and I invested in a few used stands that he found on Craigslist and Facebook Marketplace. And after a few years of being sidelined from hunting due to knee injuries, my father also set-up his tree stand, giving us another stand to utilize. We chose spots on a mix public and non-posted private lands in Chittenden and Washington Counties and hoped for an enjoyable archery season. And even though our freezers are still empty, I wasn’t disappointed.

The observance of simple, natural activity and incremental phenological changes in the woods while sitting in our stands was something that I’ve never consciously experienced before. The last time I spent any time in a tree stand was as a child while hunting with my father. A time when I was acutely more aware of the snacks we brought for the hunt than of which songbird species had started to disappear from the forest on their journey south. And as an adult, returning to Vermont and trying to re-incorporate hunting into my new and busy life, I was challenged in carving out enough time to thoroughly and properly enjoy an archery season. But this year was different, and with the help of my hunting partner, the time spent in our tree stands made the difference.

Sitting in a tree stand gives you a perspective that one doesn’t often get while being in the woods. How often do we just experience the forest without moving, without being active? And how often do we get the opportunity to sit in the mid-canopy as unobtrusive observers? There are few other activities in the woods that bring you back to the same pin-point location, repeatedly, for an extended period of time. From the days used for scouting out potential spots and the trips in made while setting up the stand, to the multiple mornings and evenings endured while sitting and waiting for a deer, a lot of time and focus is spent in that location.

Regularly returning to a specific place allows you to observe the small changes that happen all around us each year in the northern forest without us actively noticing them. Fall is a season of minor transformations that culminate into our region’s most dramatic seasonal change, beginning in late August with the first tinges of red on the maple leaves to the landscape of textured browns during stick season. Once you are intimately familiar with a place, you notice the afternoon when the ash leaves turned purple or when the biggest flocks of geese start to honk overhead. You can pick out the day when the mosquitoes finally stop bothering you for the season, and the evening that the angles of the sun’s rays hit differently than the week before.

Sitting in our stands, my hunting partner and I noticed the change in the sound and rhythm the acorns made, dropping out of oak trees, accompanied by the scurry of the chipmunks venturing to collect their food. Early in the season, they were silent, only noticeable by a quick thunk of a falling acorn or a snap of a twig.  By the end of October, those little critters crashing through the dry leaves continually tricked us into thinking a much larger animal was nearby. We noticed the productivity of the feral apple trees this year, and which trees grew the tastier apples, evidenced by the trees that had fruit go missing early in the season versus the ones the have been left to freeze on the branches. We noticed the day that the serviceberry leaves turned an electric fire-orange and have recently commented how the only green left in the woods belongs to the invasive honeysuckle and buckthorn.

My hunting partner has climbed into one of the stands before daybreak and sat unknowingly underneath a flock of roosting turkeys, who only revealed themselves when they flew down around him a few hours later. I’ve watched ruffed grouse, a bird typically only seen when they flush from the underbrush and cause a cardiac episode to anyone nearby, below me, just being a grouse, scratching and pecking on the ground. Together, we’ve watched a white-tailed doe get up from her bed, hidden by fur the identical color of the gray goldenrod tops, disappear out of view into thicker cover. Squirrels have run down the boles of the trees we’ve been sitting in, and chickadees have swooped around us at an arm’s length. 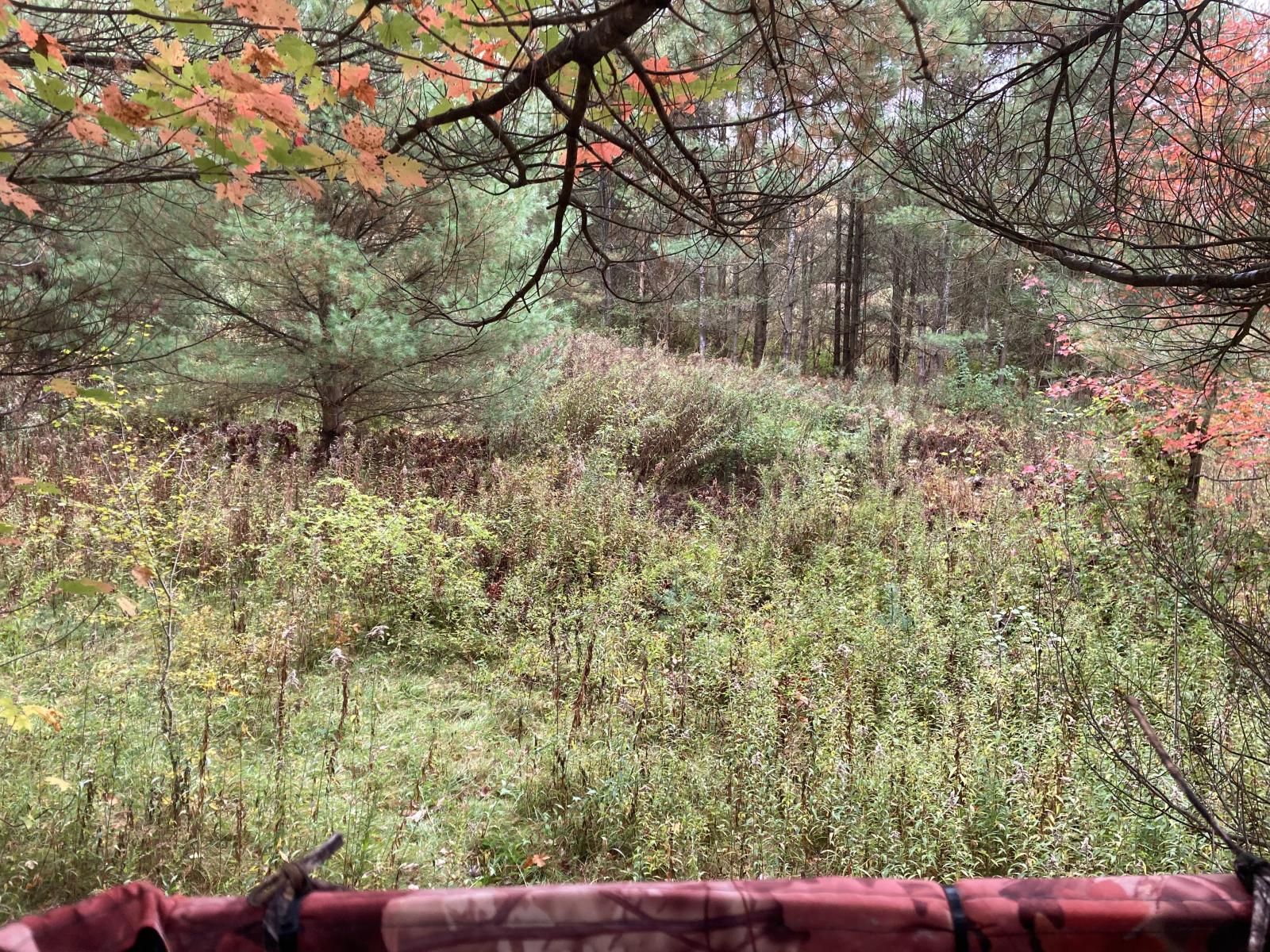 Hunting, and specifically archery hunting, with the required stillness and patient focus is an incredibly impactful way for a person to connect with nature.  Sitting in a tree stand through the Vermont fall has edified me in this truth. And now, as we’re midway through the rifle season and careening into stick season, I’m looking forward to observing the woods through a whole new season of change for my arboreal perch.